Search
22 January 2014
Unless more affordable homes are built, the National Housing Federation has warned that the future for the 3.3 million young adults stuck at home ‘will only get worse’.
Office for National Statistics figures yesterday revealed that 3.3 million 20 to 34-year-olds lived with their parents in 2013 – the highest number since records began in 1996.
Between 1996 and 2013, this number rose by 25 per cent despite no increase in the population of 20 to 34-year-olds.
David Orr, NHF chief executive, said: ‘Moving out and setting up a home of your own is a normal rite of passage. Yet these figures show that England is becoming a country where young adults are struggling to spread their wings and be independent.

‘Two-thirds (66 per cent) of parents with at least one adult child living at home say they are doing so because they simply can’t afford to move out. And the situation will only get worse: our research shows that by 2020 rents will rise 39 per cent and house prices will shoot up by 35 per cent.

‘Unless we build more of the right homes at the right prices in the right areas, adult children will be stuck in their childhood bedrooms and parents will be unable to move on with their lives.

‘With thousands locked out of home ownership and struggling with rents, the Yes to Homes campaign is giving people a chance to speak up and say we need to build more homes locally.’ 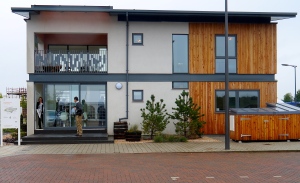